The Turtle Foundation on Boa Vista 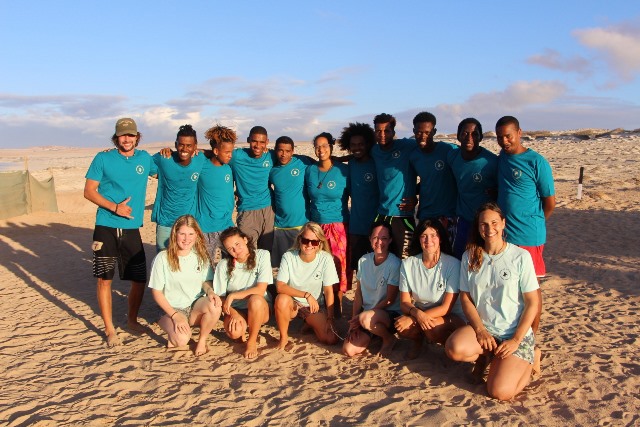 About the Turtle Foundation on Boa Vista

The Turtle Foundation on Boa Vista is a non-profit organization dedicated to protecting and conserving endangered sea turtles.  We have been working to protect Boa Vista’s threatened loggerhead turtles since 2008.  As of 2012, we are an officially registered NGO in Cape Verde, known locally as Fundacao Tartaruga.

Why the Turtle Foundation came to Boa Vista

Sea turtles are an endangered species and officially protected by law in Cape Verde. However, they are exposed to multiple threats. These threats include; the slaughter of female Loggerhead turtles when they come ashore to nest; the destruction of their nesting beaches by development; being caught at sea in fishing nets; and the ever-present danger of plastics in the water and on the beaches. Sea turtles need our help!

How did we get here?

Cape Verde has the third largest nesting population of Loggerhead turtles in the world, and most of that nesting is on Boa Vista.  But in 2007, Turtle Foundation learned that over 1100 female turtles were brutally slaughtered as they came ashore to lay their eggs, a number that represented up to 1/3 of the nesting population!  We knew we had to take action to try to prevent the total extinction of these magnificent turtles in this paradise.

What did we do?

We responded to the crisis quickly, sending personnel to Boa Vista in 2008 and establishing a beach monitoring program. The Cape Verdean military provided support, on one of the main nesting beaches at Porto Ferreira. That year, there was a decrease in turtle mortality of 90% from the previous year.  Heartened by this, we continued to expand the protection program each year.

What are we doing now?

By 2019, our anti-poaching beach patrols had expanded to almost 40 kilometers of protected beach, about 70% of the nesting area.  We operate 5 beach camps during the nesting season, and partner with two local organizations, dozens of international volunteers, and local men and women we have trained and hired to be rangers and coordinators.  Additionally, we financially support two community-based projects that protect their own beaches. By 2019 the number of killed turtles was down to 17, and we counted 7,232 nests – the second highest number since we’ve been monitoring. We are using night-vision drones to help us find the nesting turtles and the poachers.  And in June 2019, after almost two years of training in Switzerland, our two conservation dogs Karetta and Kelo and their handlers arrived in Boa Vista to help with our conservation efforts.

Success, you are thinking! But wait, there’s more:

We know, of course, that in the long term just stopping the turtle slaughter isn’t enough.  We collect data on the turtles and nests, so we can understand better the population dynamics. We’ve helped satellite tag some turtles so we can learn about mating seasons and migration routes.

In addition to this, our volunteers organize beach clean-ups to remove plastic trash. The Turtle Foundation on Boa Vista started “School in Nature” programs for the local school children, now being run by a local organization. In partnership with other local NGOs, we work to coordinate scientific, education and awareness, and community projects.  A primary goal is to help find alternative sources of income for community members. This includes producing and selling food, organic cosmetics, and supporting artisanal fisherman in improving safety at sea. We’ve trained and hired 89 Cape Verdean citizens to become wildlife rangers and coordinators. We are also a founding member of the Cape Verdean network TOALA. The network includes NGO’s, university research organizations, government organizations, and other stakeholders. All work together for the future of the turtles and the communities.

We couldn’t be more proud of our accomplishments, but we know there is more to do and there will be challenges, and opportunities, ahead.  If you’d like to follow our work, please check out our website at www.turtle-foundation.org . Our website also provides information on our projects in Berau and Sipora, Indonesia, as well as Cape Verde.  You can also check our Facebook pages; Turtle Foundation and Turtle Foundation – Volunteers, and twitter @TurtleFound.

And of course, we would always welcome your thoughts, questions, and support!

Boa Vista: About the Turtle Foundation – Who are we?