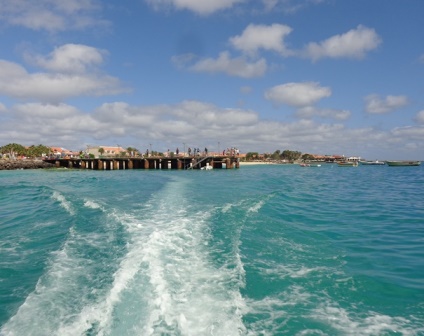 NOTE: 2015 –  Unfortunately C-Riders no longer operates on Sal Island or in Cape Verde.

I have been on a number of different excursions out to sea around Sal, but unfortunately didn’t get to see much sea life. A turtle and a flying fish were about it!

Today I didn’t expect it to be any different; I couldn’t get excited about the chance to see more sea water than I had before.

I’d previously received my instructions from Monique (at C-Riders) about how to put on the lifejacket and what would happen if I fell overboard. Monique explained that this was an expedition, that they couldn’t guarantee sightings and if during the expedition we didn’t get to see a lot of sea life, we could then go snorkling, but people could decide whether they wanted to snorkel or stay on the boat.

I agreed to meet them on the pier (pontao) in Santa Maria 15mins before we were due to board. I had already been informed about where to sit and was hoping not to get too wet. After donning the lifejacket, my next task was to walk down the steps of the pontao (pier) and onto the transfer dinghy, thankfully Monique got on first and with the help of another assistant they made sure I got on safely.

Some local people watched us set off.

We headed out toward the boat

As we approached Alex was waiting to greet us.

We pulled alongside.The next manoeuvre was to step on the inflatable part of the dinghy again, then onto the inflatable side of the boat and step down into the boat. Again I was thankful for the assistance with this from Alex, Monique and their assistant Francisco.

I made my way towards the front and handed my bag to Monique, the bag held items I wouldn’t need during the trip. Monique explained that I shouldn’t lean forward with chin close to the handrails in front, if I did I could hit my chin or mouth on the rail when the boat was traveling up and over the waves and down, sometimes with a thud and a jolt. I didn’t like the thought of breaking my jaw or teeth!

My next movement with the help of Monique was to lift one leg up far enough to clear the padded seat in a straddling movement. Again I was very thankful for Monique’s assistance.

I soon realised why it was important to hold on to the handrails, we hadn’t set off but the boat still swayed with the waves.

We set off and had a closer look at the sailing vessel ‘Eye of the Wind’ (Jersey). Alex played some exciting music as we sailed up close to it… more like music from the ‘Pirates of the Caribbean’… …. We all smiled!

There were only three of us on this trip, Jan and Simone from Germany, myself and then the crew. Off we set, further out to see, first slowly then picking up speed and crashing down after clearing some waves, up and down it continued with me holding on tightly. At one point the top of my body must have looked like I was trying to head butt someone in front, to the back and sides of me, I was thankful I didn’t have false teeth!. Monique told me to place my feet further forward for balance which helped a lot. I held on while at the same time trying to keep my camera dry. I wasn’t too bothered about my clothes getting slightly wet, next time maybe I would wear shorts not cropped trousers, but I am a bit wiser now.

There is a two seater bench on which you can sit, Monique and Franscisco are standing on it for balance in the photo below but we were informed that you are more likely to get wet sitting there and you won’t be able to control your body movement, as well as you would in the front seats.

We saw a few flying fish. We continued sailing around, eyes peeled to the waves but not seeing anything else for a while. Monique (Alex’s wife) shouted that if we saw something raise one arm, and that if we raised two arms she would think we were just enjoying the boat ride.

We sailed around for about 30mins eyes peeled. Then there was a sighting of movement in the water. There were two shark fins, but they soon disappeared.  Shortly after we saw pilot whales and I recorded a short movie of them swimming off shore with Santa Maria in the background, then wow…. an orca… I thought I was taking a photo of the orca but on review it turned out to be a 1 sec movie with me yelling ‘killer whale’ as I filmed it swimming towards the west coast of Santa Maria. I won’t be sharing the second video of the orca as the sound of me yelling with excitement has got on my own nerves.

I hadn’t charged my camera battery before the trip because I didn’t think I would have the opportunity to see anything spectacular, as there hadn’t been sightings the days before my trip, this will teach me.

I took a few more shots, then my camera battery died! Me without a working camera and with all this happening all at once.  I shouted out that my camera wasn’t working and a Knight in shining armour, namely Alex Cleiran the Captain and pilot of the boat, said he had a camera and I could use his ….. phew!

Then someone shouted over there and off we went, two orca fins, then on the other side more pilot whales, then off in another direction. Back and forth, left and right we went as more sightings were spotted. We were all really excited and I couldn’t believe my luck. Then an abundance of dolphins, back to pilot whales – to orca’s – to dolphins – to pilot whales – orca’s……. this lasted for about an hour or more, but I wasn’t watching the time….it was fantastic! ….. I could go on, but you may think I was gloating 🙂 We could have stayed and watched them for longer but we decided it was time to move on as it was getting late.

Jan and Simone had originally said they wanted to snorkel while out on the trip, but being a bit wet and having spent longer with the whales and dolphins etc. they decided not to snorkel….. probably nothing to do with the fact that Alex had suggested they snorkel where the Orcas were sighted, he was joking! C-Riders provide an option for sightseeing and snorkling, the latter to be done off Murdeira, but everyone agreed the time we had spent following the whales and dolphins was more than what we could have hoped for, so we headed off to calmer waters and stopped for a while as Monique had prepared some sandwiches which we shared, we were also given a bottle of water each, I was parched. We talked about what we had seen and the fact orcas were not often seen off the coast. After finishing our refreshments we all agreed to head back to shore.

This had been a 3 hour sightseeing expedition with snorkling included. we had departed from the pontao at 2p.m. and we returned to the pontao by 5p.m. The leaflet promoting C-Riders says that the expedition is only 2hrs, but this has changed to 3hrs. C-Riders also offer speed junkies the chance to go on speed boat trips which they call ‘Ocean Blasts’.

Thanks to C-Riders and the crew for letting me share this experience. Also to Alex for the loan of the camera and to Jan and Simone for sharing photos and movies with me.

I’ll let these short movies tell some of the story.

What you need to consider:

• Getting on and off dinghies
• Raising your leg over the seat, when on the boat.
• C-Riders can provide a windcheater
• Trousers will get wet
• Items in pockets may get wet
• Waterproof cover for camera
• Rotation or drop of boat
• Toilet facilities?
• Bumpy ride if there are waves
• Caps and sunglasses may blow off
• Bags to be secured away
• If sitting on bench at back you will get wet

– If sitting on bench at back, there will be more movement of your body
•Sitting on the secured seating on boat

PLEASE NOTE: The boat was damaged in the hurricane that hit Sal at the end of Aug 2015. C-riders are no longer operating this service in Cape Verde. 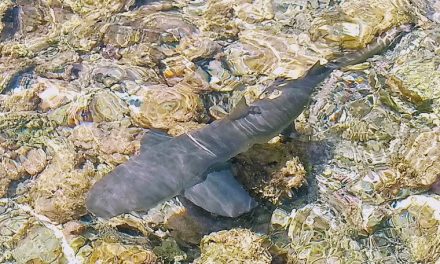 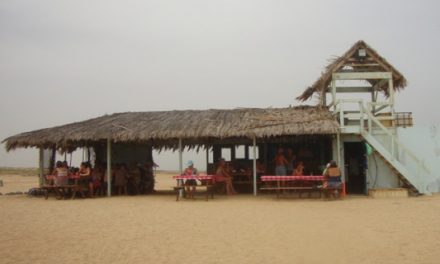 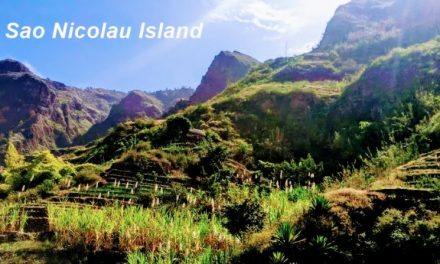 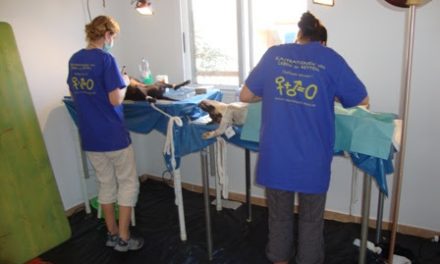